Many factors contribute to the development of bladder dysfunction and urinary incontinence in old age, including hormonal changes in the body, lifestyle, side effects of chronic medications, medical and surgical conditions and conditions.

For many older women, urinary incontinence develops gradually over an extended period. The process can begin as early as menopause. With age, when the body undergoes a decline in functional activity, the symptoms of urinary incontinence worsen, turning into a serious medical problem.

Urinary incontinence leaves a serious mark on the personality of an elderly womanwhich affects her social interactions, self-esteem and life satisfaction. It also increases the risk of increased anxiety and anxiety, depression, and self-isolation. From a medical point of view, urinary incontinence increases the risk of dermatitis, secondary infections of the genitourinary system, bedsores, and sleep disturbances. It is believed that involuntary leakage of urine is one of the most common chronic conditions in older women. Of course, the peculiarities of the anatomy of the woman's urinary system and the presence in the history of natural birth, which lead to a weakening or damage to the pelvic floor, are of great importance in this. A group of scientists have done an interesting study. In a survey of 189 nuns, whose average age was 68, it was found that 50% of them had impaired urinary control. According to nursing homes, 60% to 78% of older women suffer from urinary incontinence.

There are several types of incontinence that occur for different reasons. The most common urge incontinence is associated with uncontrolled muscle spasms in the bladder, causing an elderly person to literally run to the toilet due to a sudden urge to urinate. Stress incontinence is also common, when an increase in intra-abdominal pressure when coughing, sneezing, or physical exertion leads to urine leakage. 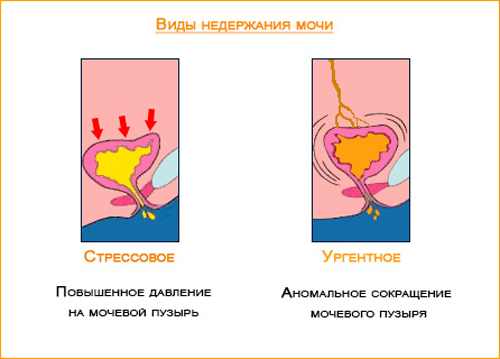 Unfortunately, often among the elderly, there is also a functional type of illness, when, as a result of concomitant severe physical or mental illnesses and immobility, as well as lack of care, the elderly person cannot visit the toilet.

The symptoms of urinary incontinence in older women are significantly worse in the presence of other chronic diseases. Physical and mental illness, lack of help from relatives and friends (if such help is needed to visit the toilet), the adverse effects of drugs can lead to a deterioration in the condition of an elderly woman. For example, a vigorous cough associated with upper respiratory tract disease, taking ACE inhibitor medications, worsening heart failure or chronic obstructive pulmonary disease (COPD) can precipitate or exacerbate urinary incontinence in older women.

Attention! Although bladder capacity and contractility decrease with age, involuntary contractions increase, and sphincter function decreases, urinary incontinence is NOT a normal part of aging. It is very important to understand that this is a MYTH. Evaluation and treatment can help to cope with this problem and significantly improve the quality of life.

An elderly woman at the age of seventy, at the insistence of her daughter, turned to our clinic. From the anamnesis of life it turns out that she used to go to the clinic in connection with depression associated with the loss of her husband, has three adult children, previously worked as a music teacher, and is currently retired. She used to like going to theaters and concerts, which she hasn't done lately. I have never smoked, does not abuse alcohol. Drinks two cups of coffee and several glasses of water a day. From medications, he takes diuretics in connection with peripheral edema of the lower extremities.

During a conversation with the woman, it turned out that she was incontinent in the form of accidental urine leaks. She first encountered this problem after the birth of her second child. This manifested itself in the form of rare episodes of leakage of a small amount of urine when coughing or sneezing. Over time, episodes of incontinence began to recur more often and acquired a different character, sometimes there was an urgent urge to empty the bladder. And later developed nocturia - incontinence at night. The woman said that she stopped seeing friends and does not want to go to public places due to embarrassment and fear of bad smell. She also feels more tired due to frequent visits to the toilet at night.

During a general examination, the woman did not reveal any concomitant diseases. At a gynecological examination, atrophy of the vaginal mucosa was determined, which is a common occurrence in older women. After laboratory and instrumental examination, the patient was delivered diagnosis of mixed urinary incontinence.

According to the doctor's recommendations, the patient stopped taking diuretics, which are not necessary for the treatment of edema of the lower extremities, but at the same time adversely affect the symptoms of urinary incontinence. Also, the doctor prescribed estrogen hormonal ointment for the treatment of atrophic vaginitis. It has also been recommended to cut back on coffee consumption, which can aggravate symptoms. At a follow-up visit, the woman noted some weakening of nocturia, but reported persisting symptoms of urgency and stress urinary incontinence.

Since the initial treatment did not give the desired results, the doctor ordered the patient to do Kegel exercises to strengthen the pelvic floor muscles. After a month of conscientious practice, the woman noted a significant improvement in symptoms, but involuntary urination was still noted 1-2 times a day. Therefore, several medications were prescribed to stop the spontaneous contractions of the bladder muscles, which are the causes of persistent urine leakage. At the same time, it was necessary to continue to perform Kegel exercises and adhere to the previously given recommendations.

After a month of treatment, the woman told about a complete recovery, the phenomena of incontinence bothered her no more than once every two weeks.

From this clinical example, it can be seen that old age is a risk factor for the development of urinary incontinence. But every elderly woman should understand that this is not the norm and should not put up with annoying symptoms of the disease. Professional help and family support can help you cope with the problem. An elderly woman, like any other, deserves a better quality of life.