Understanding the anatomy and function of the foreskin makes it possible to assess its importance for the normal functioning of the penis.

The foreskin, or prepuce, is essentially a "flap" of skin, a two-layer fold that covers the head of the penis. 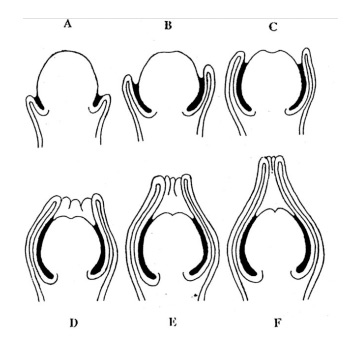 Figure: Development of prepuce in the prenatal period

Before birth, the foreskin is soldered to the glans penis a layer of epithelial cells called synechiae (black lines in the figures). By the twenty-fourth week of intrauterine development, the formation of the foreskin ends. However, the leading edge continues to grow forward and after the baby is born.

Gradually, in the first years of a child's life, the foreskin is separated from the glans penis... The duration of this process is extremely variable and may end before the birth of the child or continue up to adolescence... And if this did not happen naturally, we recommend separating the foreskin from the glans penis no later than 5-6 years of age, in order to avoid infectious complications.

In adulthood for sexual intercourse the penis should become erect. In this case, the penis increases in length by fifty percent. Since the foreskin is a double fold of skin, this allows the penis to lengthen freely during an erection.

Microscopic examination confirms the fact that the foreskin is not only skinparticipating in erection, it is also richly innervated and supplied with blood.

The structure of the foreskin 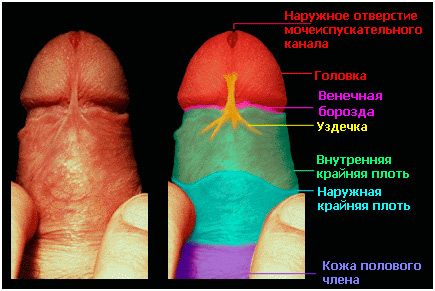 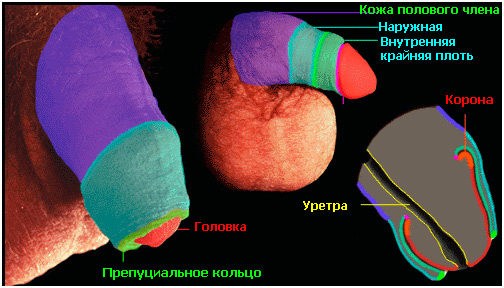 In the structure of the foreskin, there are:

Sensitivity of the foreskin

We will pay special attention to the sensitivity of the foreskin, since it is a large number of nerve endings located in the prepuce that provide sensations during intercourse.

The most sensitive areas of the penis: 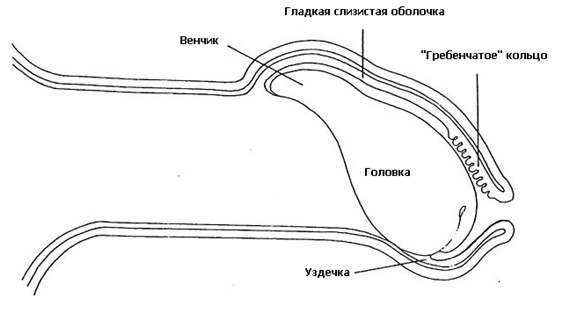 On the lower surface of the penis, the ring passes into the frenum of the penis. The Taylor ring contains a huge number of receptors that respond to stretching, which are the trigger of the sexual reflex and are responsible for erogenous sensitivity. 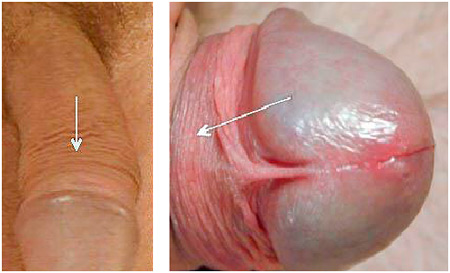 When the preputial ring is stretched as it passes through the head of the penis, the receptors are stimulated, resulting in a feeling of satisfaction.

The glans penis has a more meager innervation, and, therefore, less sensitivity, in contrast to the above structures.

Dimensions of the foreskin 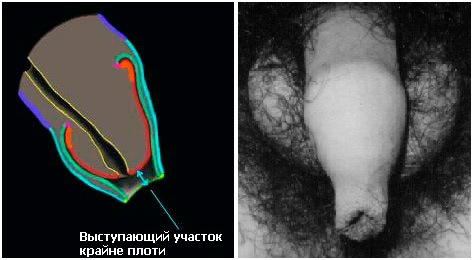 Protective mechanisms of the foreskin

The foreskin is equipped with a number of defense mechanisms against infection. Firstly, this is achieved due to the sphincter, which provides a snug fit to the glans penis and prevents foreign bodies from entering the preputial space. The secret of the preputial space contains lysozyme and other substances that destroy pathogens. On the other hand, the bridle is a place of accumulation of Langerhans cells, which can serve as a gateway for sexually transmitted infections, including HIV, to enter the body.

In fact, in modern worldwhen men practice hygiene on a daily basis, the defense mechanism has lost its acute relevance.

1st picture. The area between the upper and lower lines is the outer foreskin. The outer prepuce is about the same length as the skin covering the shaft of the penis. The internal prepuce is equal in length to the external foreskin and is not visible.

2nd picture. The foreskin is shifted by the hand by about 2 cm. The zone between the upper and lower lines is represented by the outer foreskin. The area under the lower line is the internal prepuce (about 0.5 cm).

3rd picture. As in the previous pictures, the area between the upper and lower lines is the external prepuce. Between the head and the bottom line is the inner foreskin, gathered behind the crown of the head.

4th picture. The foreskin is drawn even more. At the same time, the folds of the inner foreskin were straightened. 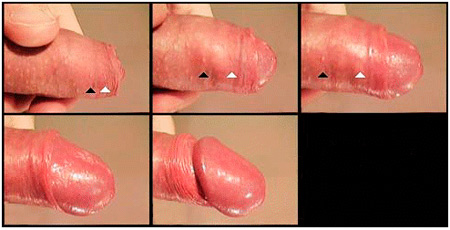 During an erection, the penis increases in size by 50%. The movement of the foreskin is similar to that described above.

Functions of the foreskin

2. Protective functions of the foreskin